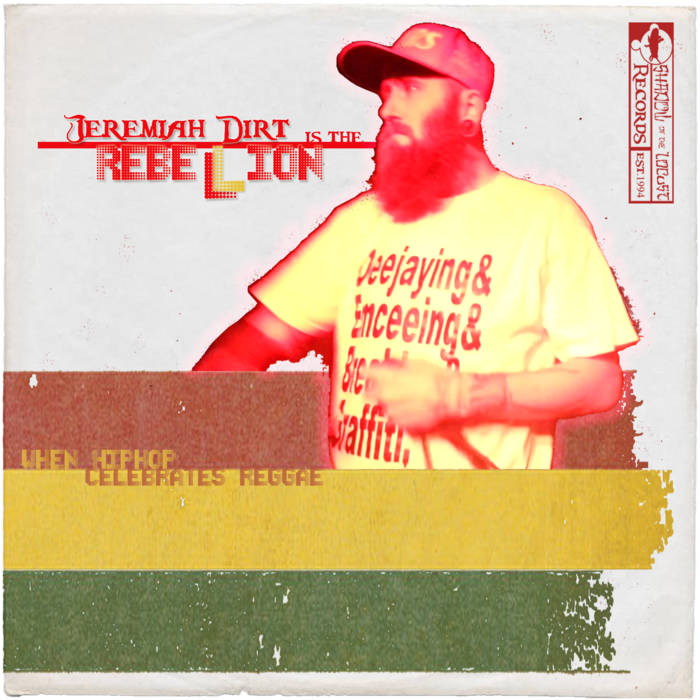 Donald Gray Been too long since we've heard from Mr. Dirt. The Rebel Lion was worth the wait and a dope album from start to finish. Jeremiah took a chance on this album, steering away from his comfort zone boom-bap production style and this time creates a perfectly meshed hip hop/reggae hybrid. Stand out tracks include Talk is Cheap, Lift Up Jehovah (which chops up a Bob Marley sample), Send Love (His hip hop love letter to his wife Lucinda), Loose Cannon, Never
Warn You, Fight For You & High Without You. Favorite track: Talk is Cheap (w/ DJ Kair).

FROM JeremiahDirt.com Blog:
It has been FAR too long since we've had a new solo project release from our eclectic Hiphop Artist, Jeremiah Dirt. As is the usual case with him, it seems the wait is over after a long hiatus... almost 9 years now! Early album promo's have been telling our ears that the wait (as usual again) is going to be well worth it! In October 2016 we will have NEW Dirt music.

The album is called "the Rebel Lion" and it is Dirt's homage to his love for all things Jamaican & Reggae. As a Youth, Jeremiah was homeless at times. In his early teens he found friendship and fellowship in the local Pacific Beach, San Diegan, Jamaican-Born Rastafarian community. Although Jeremiah is not Rasta by theology, he has never forgotten the feeding of body and soul he received from his kind-hearted adopted family.
Neither had he ever forgotten the vivid soundscape of reggae music and its culture that he was introduced to along the way. Up until that point, Dirt had never thought much that there was any other kind of music except for hiphop and so reggae quickly became his second music love (the 1st two rap crews he was in, he was known for strictly dancehall chatting. But it would take a lot to get him to do that now). Anyone who has paid close attention to his creative endeavours can hear his 'Jamaican patois' come through his lyrics at times.

Jeremiah has been storing lyrics & beats for this project since 2004. That is 12 years of creative development from this consummate artist, so we are sure to expect a lot!
"the Rebel Lion" is strictly groove-driven. The goal was to sample ONLY from Reggae, layer bangin' Hiphop drum breaks underneath, and then let Dirt loose over the top with his lyrical prowess. The mood of the project takes the listener from the feverish pitch of dancehall to the smoothness of roots, rock-riddims. From Dirt's vocals, we get the same creative dichotomy- from his as-expected revealing and emotionally-laden lyrics to light-hearted romps through songs as well as rucus rap revolutions. The Final is all very raw and meant to be as a purposeful celebration of both the Reggae & Hiphop genres history & upbringings.

As is custom, it seems that Dirt has rewarded our wait, "the Rebel Lion" is packed! Expect Twenty-Plus tracks, a host of feature artists & DJ, and a few extra tracks to boot for digital downloads.
To top all of this off... Dirt has not stopped creating with this 'Rebel Lion'-vibe as he's admitted to having a bit of a start for the NEXT reggae-infused album (a bunch of studio sessions that wouldn't fit on this album... so maybe we'll get another Dirt solo project sooner than we are used too!)


FROM Official Press Kit:
Jeremiah Dirt has given us a steady stream of Great Music for 20 Years and it hasn't Stopped Yet!
"the Rebel Lion" is another Explosive Album that explores the many facets of this artists' Lyrical Creativity. His self-proclaimed 'Celebration of Reggae', "the Rebel Lion" is an exciting SoundClash of Hiphop & Reggae! The tracks deliver Groove-driven samples from the firm moody cadence of Dancehall Grind to the Mellowness of Roots, Rock, Reggae Riddims. Over the Top, we get all that we ever expect from Dirt- from his hectic Battle Flows to his Revealing, Emotional Prose.
"the Rebel Lion" is yet another J. Dirt album that should not be slept on, from a Microphone Veteran that has Delivered Consistently Fresh Material for Two Decades!